A Gem within a Gem

San Gimignano is beautiful and enchanting, with its many medieval towers still rising high into the air. You'll fall in love with the charm of San Gimignano as soon as you arrive, but many spend too little time in San Gimignano to discover all of its treasures. One of them is the interior of the Duomo of San Gimignano, also called the Collegiata di San Gimignano.

I have to confess something: it took me a while to discover the Duomo as well.

The very first time I went to San Gimignano, I was with a group. It was also raining. These two factors likely contributed to too little time in San Gimignano, and today many only dedicate half a day or less to exploring the iconic town. So my main suggestion is this: if you have limited time, of the few things you do in San Gimignano, make sure to include a visit to inside of the Duomo! 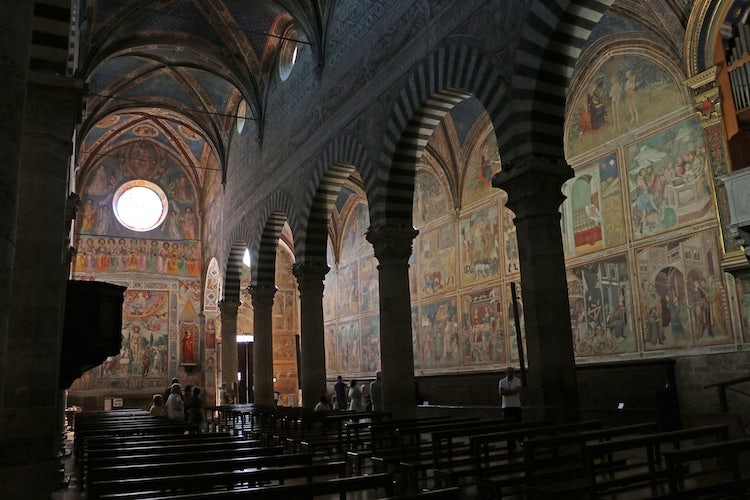 Frescoes are the books from the past

The treasures inside include a fully-frescoed Duomo, which has NEVER actually needed "restoration" throughout the centuries.

The colors you see are the original ones painted in the 1300s and their vividness and brightness is awe-inspiring. While some sections do show signs of wear and tear with missing pieces (San Gimignano was bombed during World War II), others seem to have been painted only recently.

Likely this is because the side windows were closed in order to do the frescoes and the reduced amount of light inside limits any damage. The frescoes were only dusted off in 1999, as part of the terms for use of the Duomo in the film "Tea with Mussolini" by director Franco Zeffirelli (which I highly recommend you watch before visiting Tuscany, if you haven't seen it yet) . 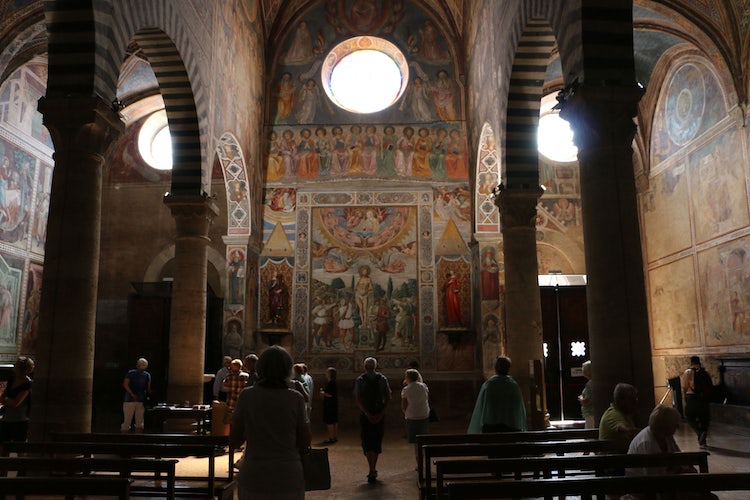 As you enter through a side entrance, on your right you'll find a fresco cycle dedicated to the stories of the Old Testament while on the facing wall (right wall as you face the altar), stories of the New Testament are portrayed.

The frescoes of the Old Testament are by Sienese master Bartolo di Fredi while the New Testament ones are said to be of someone from Simone Martini's workshop.

Many believe the artist could have been Lippo Memmi (Martini's brother in law) or his brother, Federico Memmi, or even Donato Martini, Simone's own brother, there is no documentation... in any case, not by Simone Martini himself since he was in France at the time. 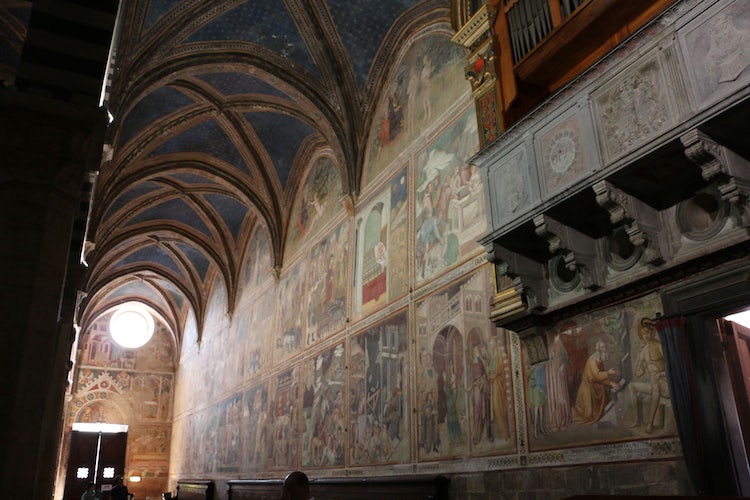 As you look at each wall, the scenes start from the far left of each wall and have to be read across the top level all the way to the right, the same on each of the 3 levels you see. The Old Testament starts with the Creation of the World, then of Man, showing Adam in the Garden of Eden and then the creation of Eve.

The last one at the top shows the eating of the forbidden fruit. You have to go back to the far left to then continue on to the second level, which continues with the banishment from the Garden of Eden, then the stories of Cain and Abel, Noah and his Ark, Abraham, Joseph, Moses and Job. Whether you're Catholic or not, the scenes will compel and draw you in.

Move on to the back to the interior wall of the façade where you'll see more frescoes, the main one being the "Martyr of St. Sebastian" by Benozzo Gozzoli from 1465. Gozzoli also was the master that frescoed the Chapel of the Magi in Florence's Palazzo Medici-Riccardi, but to see more of his great work in San Gimignano you just need to head to the Church of Sant'Agostino and head behind the main altar, as it's a bit hidden ;-).

The two beautiful wooden statues to the sides are by the great Jacopo della Quercia, another Sienese artist.

While you're at this spot, look up to the arches on each side in the central part of the entrance. Admire and and take note of what happens in these depictions of the two possibilities of what happends after death: to the left, you'll find the "Glory of Paradise" with all those who are blessed going to Heaven (very peaceful) and directly opposite on the right, the "Pains of Hell" where you can view Satan eating up Judas. Both of these are by Taddeo di Bartolo from around 1393-1403.

Doubtless to say, Taddeo di Bartolo took inspiration for his depiction of Hell from Dante's own view and shows demons torturing humans for their many sins. Frescoes, as the books of the past, were to teach the citizens to "behave"... or else! 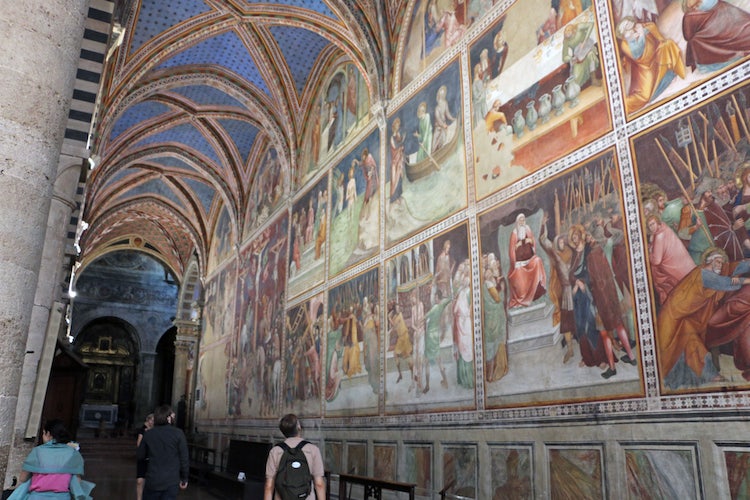 Now, head on to the opposite, right hand side of the basilica (as you face the altar) to see the contninuation of the stories as they make the transition from the Old to the New Testament. The very top level are once again read from the left to the far right, but there's one big exception. The far left on the bottom has two levels dedicated to the Crucifixion and Resurrection, so to continue the cycle before those episodes you start to the right of the Crucifixion, head to the right and then return on the lowest level from the right to the left to end up at the Resurrection scene.

It is quite an interesting way to set up the stories, and makes for an interesting time in trying to identify what's happening in each as well as the sequence.

The Chapel of Santa Fina

The other treasure within the Collegiata is found to the left of these last frescoes, in the small chapel dedicated to Santa Fina. Here is a real jewel of the Renaissance that brought together three great Florentines: the architect Giuliano da Maiano, his brother the sculptor Benedetto da Maiano and the painter Domenico Ghirlandaio. The remains of Santa Fina, saint and protector of the city of San Gimignano, lie under the main altar.

To the right and left are two frescoes by Domenico Ghirlandaio, an artist I admit I adore. These were painted with the help of his brother, David, and brother-in-law, Sebastiano Mainardi: on the right, the dying young girl on her wooden bed with yellow violets blossoming upon her death and, on the left, the funeral of Santa Fina with all in the town paying homage, with the town of San Gimignano and its towers itself "photographed" in the background.

This is one reason I love Ghirlandaio: he took the time to add small, every day details into his works so that often you can truly feel as if his paintings were a photograph of his day. It permits us to identify small details in clothes, ways of dress, household items and such that are caught in his paintings and frescoes. 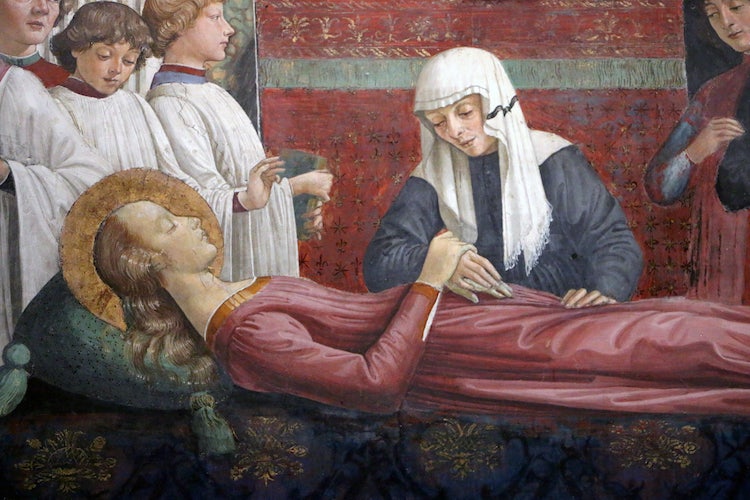 While the colors remind one of Ghirlandaio, the gorgeous "Annunciation" you admired as you made your way into the Duomo is attributed to Sebastiano Mainardi because of less-sure strokes, but likely using a design by Ghirlandaio himself (remember Mainardi worked with Ghirlandaio and was his brother in law). You might also have noticed the baptismal font as you entered into the loggia: up until a few decades ago, the arcades has been closed and this area itself functioned as the city's baptistery.

Our photographs can only show you a hint of the beauty of all of this artwork, you need to visit the Collegiata to see it for yourself!

Don't make the mistake I made and not go inside the Duomo when you first visit San Gimignano: even if you have only have a few hours in San Gimignano, make sure to visit the Duomo and enjoy the treasures within as it will make your visit to San Gimignano more memorable. It took me a while to discover them, but I've now gone back several times to enjoy the beauty within the Duomo di San Gimignano now that I know how spectacular they are! 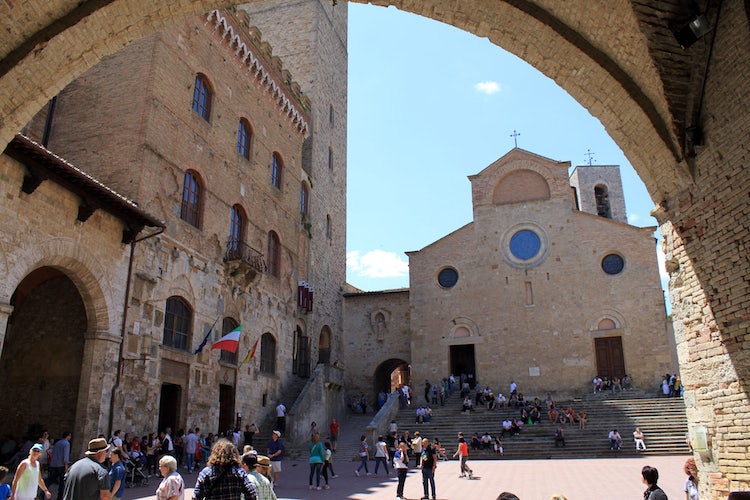 If you don't have enough time, you might end up skipping the adjoining Museum of Sacred Art. The museum has several treasures from the Collegiata and nearby churches and convents from the area, including the beautiful wooden panel by Bartolo di Fredi (who frescoed the scenes of the Old Testament inside) of the Madonna of the Rose and a Crucifix by Benedetto di Maiano. It also has many precious reliquaries, fragments of detached frescoes from the Duomo and more.

It is quite small so, if you can, buy the combined ticket for the Duomo and museum and don't miss the small collection of treasures. If you're short on time, you can skip this part and head next door to climb and visit the Pinacoteca inside Torre Grossa!

Both are closed January 15-31, March 12, November 15-30 and December 25.
Being a place of worship, visiting times are subject to change due to unforseeable lutirgical activities.

Your ticket fees go directly to preserving the Duomo of San Gimignano.

Our visit to the museum San Gimignano 1300 where the whole city has...

Walk around and to San Gimignano

Enjoy this hike along the white roads of the...