Abandoned in the Middle Ages, a Medieval beauty in southern Tuscany

The town of Sovana has, fortunately, maintained its most endearing characteristics, having avoided the Baroque restyling that altered so many churches, monuments and towns in the area. Small in comparison to Sorano and Pitigliano, actually almost tiny, it has managed to retain a charm that is perfect for a quick stroll: the landscape, the food, the wine and the Parco Archeologico Città del Tufo. Particularly suited for those who don’t like walking up and down hill because even though positioned on the hilltop, the town is laid out on a flat plane. 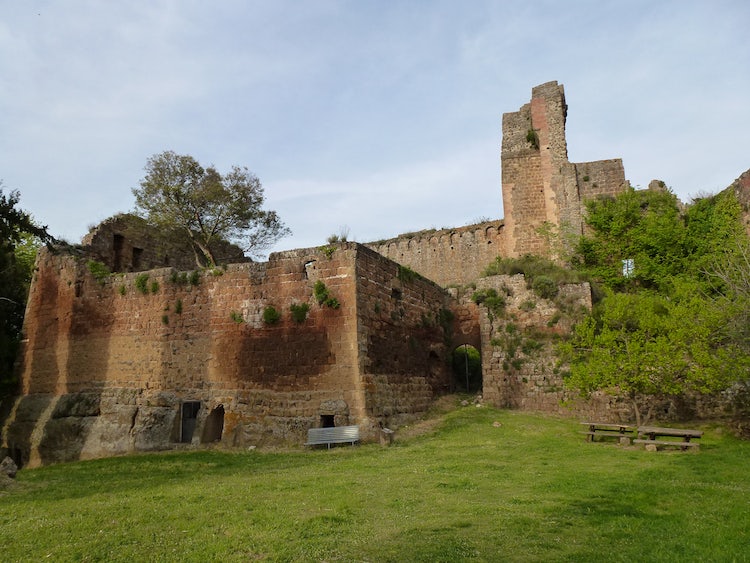 A Treasure to Behold

Once you know the history of Sovana, a walk through the town will give it a whole other dimension. A quick review of Suana (its original name) shows a particular resilience and strong desire to survive. As a thriving Etruscan city in the VII B.C., it was allied to Vulci (one of the largest city-states in Etruria!) in the struggle against Roman expansionism.

When they were finally forced to succumb to the Romans, Sovana became a "Municipium" and though it was politically "Roman", the inhabitants were inexplicably able to retain their culture, art, language and writing until the I century. B.C. Not an easy feat since the Romans were normally rather "crushing" in their conquests. 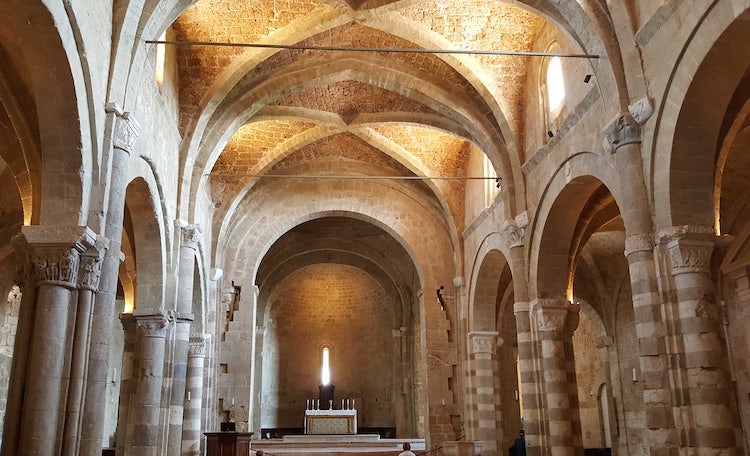 In 2004, a surprise! The Church of San Mamiliano - the place where some of the saint’s relics are kept - had fallen into total disuse and came under restoration. During the excavations, 498 gold coins that date back to the period in which San Mamiliano lived were found... giving some credit to the treasure of San Mamiliano and the island of Montecristo! Visit the Museum of San Mamiliano to admire the vase containing the precious coins.

Sovana has the reputation as being one of the first cities to turn Christian in all of Tuscany, thanks to the evangelist S. Mamiliano in the 4th century. This saint left behind a legend and some say a treasure which was eventually turned into a world famous book: the Count of Montecristo. Sovana also gives us Gregory VII (c. 1015 – 25 May 1085 AD), born Hildebrand of Sovana, who was Pope from 22 April 1073 to his death in 1085 also known as one of the great reforming popes.

Though Sovana always seemed to be on the prospering side of history, at a certain point it took a nosedive and was practically abandoned. Left to its own devices the town fell into a slow steady decline which was aided by the insidious disease of the swamp lands: malaria. It was really only recently with the title of “one of the prettiest towns” that caused an economic reprisal, putting its treasured monuments on display and opening the doors to several cafés, restaurants and gift shops. This comeback makes it one of the stops to add to your itinerary.

The town is small enough to visit in an hour, or an hour and a half if you read all the well placed signs in Italian & English telling you about the history of the monuments. The parking is located only 20-30 meters from the main square. It is a paid parking lot every day, including national holidays and weekends from 8 am till 1 pm and the again from 3 pm till 8 pm. This town is ideal for those who may have problems walking because there are no ups and downs and twisting stairs. 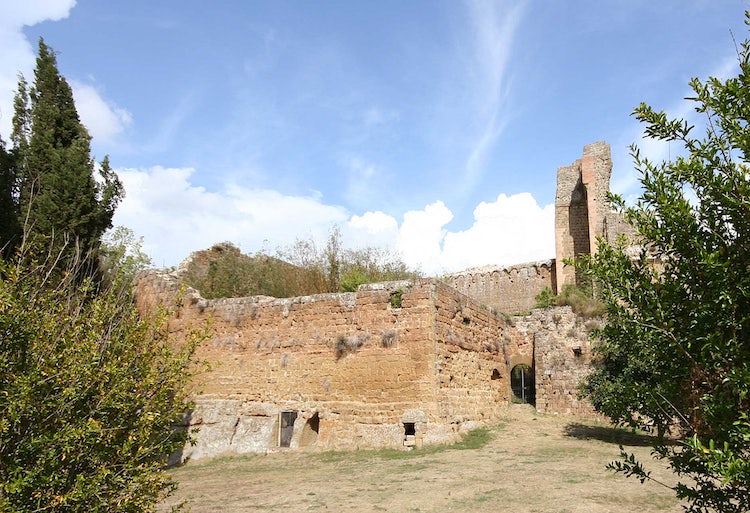 The defensive center, or at least what remains of it, was once the central point of the town providing water, a bakery and even a grain warehouse. Rocca Aldobrandesca still stands, at least in part, with walls and a tower still dominating the hilltop. Just below it are enormous tufa blocks that formed a wall built by the Etruscans probably built over a pre-existing Etruscan/Roman fortress. Due to disuse and deterioration it was dismantled in the 17th century, and what remains are only the portal, a tower and a stretch of the protective wall.

As you stroll up from the parking lot, (and pass by the artisan gelato shop) you walk right into the main square, Piazza del Pretorio, paved in red brick and hosting the Church of Santa Maria Maggiore, the Palazzo del Archivo and Loggia del Capitano. From here, if you turn right you will head towards the Church of S. Pietro and Paul and if you head left you go towards the Rocca. 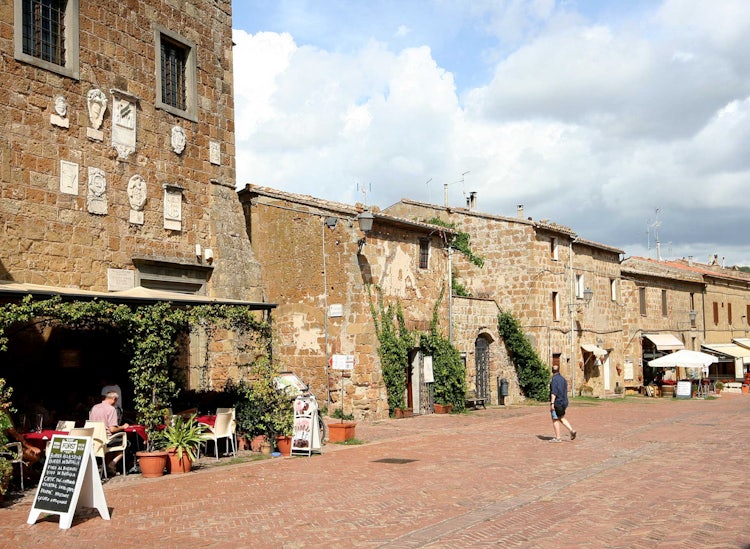 The ancient Palazzo Pretorio di Sovana is located on the right side of the square and dates back to the 13th century.

On the facade there are nine stone coats of captains of justice and Siena's commissars who were home to them. The coat-of-arms of the Palace are witnessing two centuries of intense public life from the end of the '400 to the' 600.

The building was turned into a center preserving special documents and then successively it become a temporary exhibit hall. Today the palace hosts the archaeological museum where you can see findings from nearby the Ildebranda Tomb, Etruscan Necropolis of Sovana.

Looking at the church from the outside won’t make you say WOW, but the interior of this church holds a precious example of a pre-romanic ciborium (a canopy over an altar in a church, standing on four pillars), one of the oldest intact in all of Tuscany. It is presumed to have been taken from the old church of San Mamiliano. If you take a quick stroll around the church you will also not some exemplary frescoes from the 15th century. A fun note: the façade and the original entrance are now hidden because they were incorporated into the walls bordering the Palazzo Bourbon Del Monte built in next door in the mid 1400’s.

Contrary to what you might read, there is actually an entrance fee to the church (2 Euro) as well as a very well stocked bookstore.

Soft yellow lights and a Gregoriano cant soundtrack accompany you within the antique walls of the Concattedrale dei Santi Pietro e Paolo where you will find a mystical tranquility. as well as many points of interest. Next to the altar in the left nave, we find a relic probably belonged to the church of San Mamiliano: often called "the San Mamiliano urn". Search out  the six-column crypt underneath the altar, the frescoes which adorn the virtual bare walls, look up to the stone arches and the columns with their sculptural motifs representing symbols that preceded the Christian tradition and a baptismal font from 1434. There is a 15th-century travertine sarcophagus which originally housed the remains of San Mamiliano whose psalm was later carried off to the island of Giglio for burial.

A curiosity: on 21 June each year, weather permitting, the first ray of the morning sun affects the apsidal monofora and crossing the entire nave projects on the opposite wall ... the same phenomenon is repeated in the early Christian crypt ... the orientation of the building (aligned with the summer solstice) does not correspond to the medieval rules dictated by the Church of Rome (who wanted the apse to the east) and follows the canons of Nordic cultures (Celtic-Germanic and / or Longobarde ).

Things to see Nearby

This small town can definitely be added to a full itinerary in the Maremma area, look at adding one, two or many all of the below stops as well. 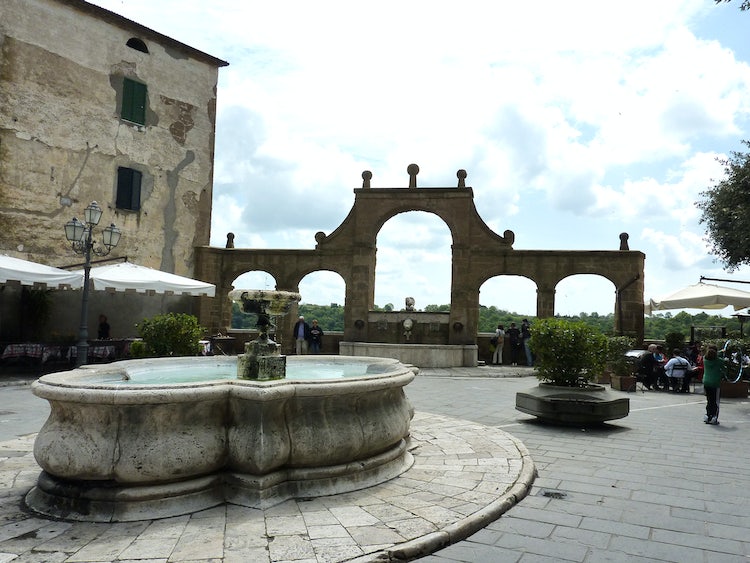 This town, perched on a cliff jutting into the Maremma landscape, is just as spectacular to see from the outside of the city walls as it is from within the winding narrow stone roads. You will find excavations, museums, fortresses, palazzo and lots of little shops, restaurants and cafes.

Spectacular! From wherever you stand - in the Orsini Fortress, the Masso Leopoldino or the Park of San Rocco, you can't help but take an awesome photo of the town and the landscape. Once you cross over from the towering fortress and its interesting museum you enter into a labyrinth of streets that are too narrow for a car to enter. This town invites you to lose yourself in the picturesque tuff colored palazzo's and stairwells. 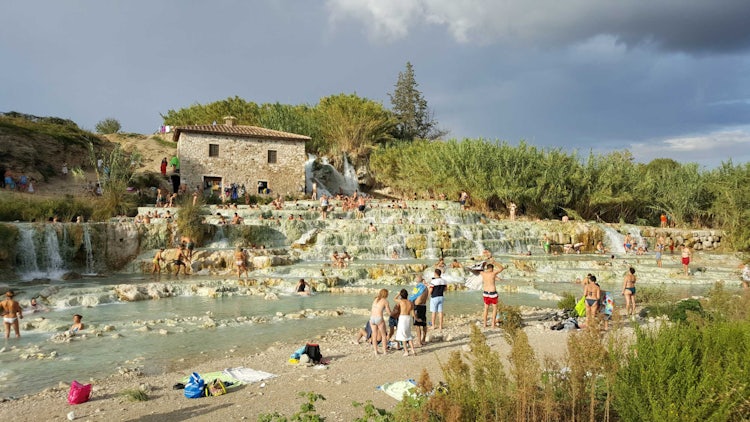 After all those stairs, all the inclines and declines and all the trekking through Le Vie Cave in the many archaeological parks, you can't help but long for a soak in some bubbly thermal waters. This area has several to offer starting with the Terme di Sorano, or the waters of Saturnia and if you are heading back towards north Tuscany via the Autostrada, then you can head over to Bagno San Filippo.

The Maremma area is huge, and to see it all you will need a few days to divide between the Città del Tufo (Pitigliano, Sovana and Sorano), the coastal Maremma with its fabulous beaches and natural reserves and the delicious region of Montecucco with great wines and mineral museums. This area is dotted with castles perched on hilltops, vineyards and national parks, like that of Mount Amiata. 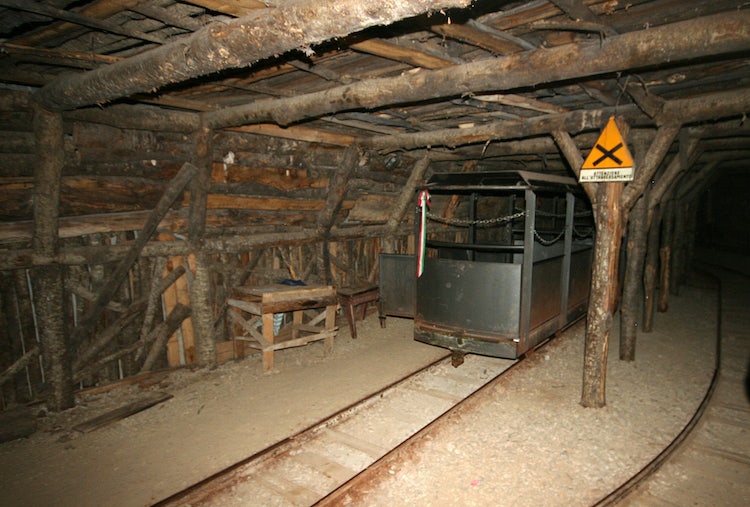 Between Sorano and Sovana you will find several points of interest where you can stop and do a bit of hiking in the totally unique formation Le Vie Cave. This open air tunnels carved in the tuff stone are fascinating, not only for their startling beauty but for the mysterious history. Pack a picnic lunch and your hiking shoes, these roads are best seen close up! 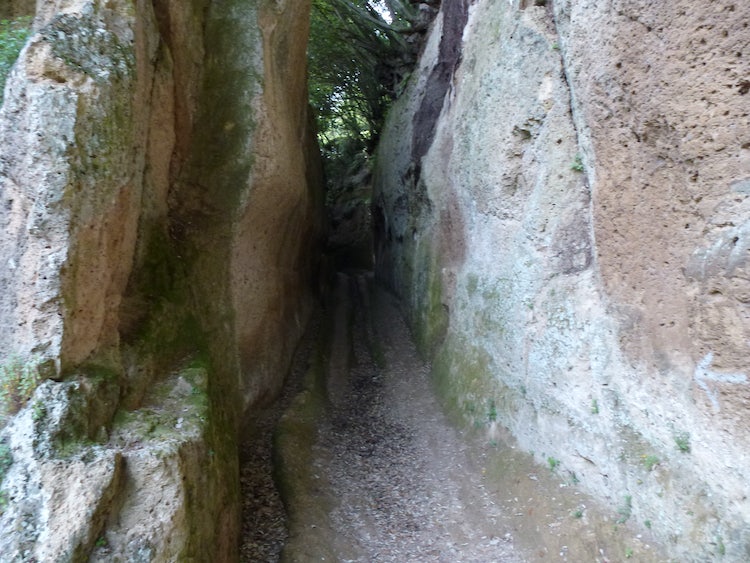 How to get There

Coming from Florence or Rome, you can take the Autostrada del Sole and exit at Chianciano Terme. The shortest route is to follow indications for San Casciano dei Bagni, and then Sovana. From Grosseto, head in the direction of the Terme di Saturnia and proceed for Sovana. Unfortunately, the town is not easily reached by public transport, so it is best to plan on having a car or private driver to get the most out of a day trip in the area.

Diaccia Botrona is a nature reserve in Maremma Tuscany, between...

The Tarot Garden is an astonishing garden located a few km from...