Visiting Siena in A Day

Siena is one of the most popular and visited places in Tuscany, a place extremely rich in history and art and with strong local traditions tied to its 17 districts (called “contrade”) and to the famous Palio di Siena, the biggest annual event that takes place twice each summer in the city.

Located in the heart of Tuscany, Siena can be easily reached from the other cities in the region by car, train or bus. The city center is closed to traffic, so if you’re planning to arrive by car you’ll still have to move on foot or by public transport to visit Siena. The train station is located outside the city, but it is well connected with the city center by buses. If you’re going to Siena without a car, I recommend you read this article on Getting to and visiting Siena without a car which has information on the various ways to get there. If you do drive to Siena, then you'll certainly find useful information on where to park in this article on Parking in Siena.

A day in Siena is certainly not enough to experience the city in all of its many sides, nor to visit all of its treasures. In a day, however, with a bit of organization, you’ll certainly be able to see the main attractions of Siena and to appreciate the charm and atmosphere of this lovely medieval town, probably leaving with the desire to return as soon as possible. If you have the time in Tuscany, do return for a second day!

What to see in Siena in less than 24 hours?

If you visit Siena for the first time, I definitely recommend you to go straight into the heart of the city, to the beautiful Piazza del Campo, one of the landmarks of the city. You can decide to start your day in Siena right here or instead head towards the Duomo, returning to Piazza del Campo later.

The main attractions of the city are located between Piazza del Campo and the Cathedral, so you’ll likely spend most of your time here anyway! 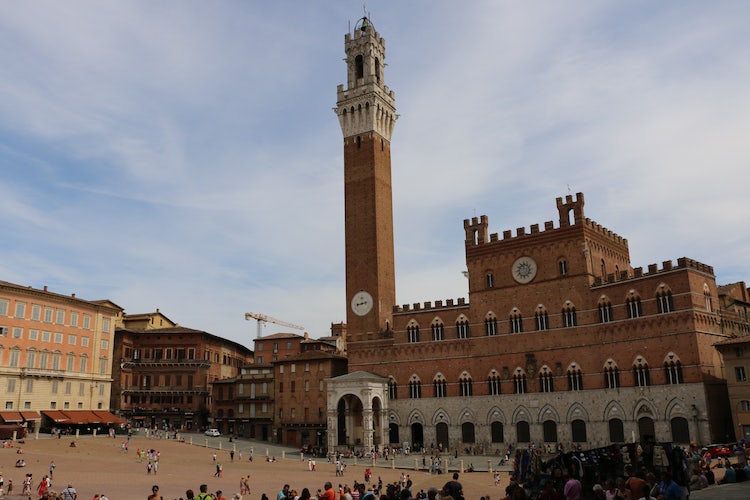 Piazza del Campo is truly unique with its shell shape, its bricks pavement and for all of the buildings facing on it. Standing at the center of the square, you can almost feel wrapped up in a warm embrace. Piazza del Campo hosts, twice a year (on July 2nd and August 16th), the famous Palio di Siena, the most anticipated, exciting event by all of the citizens in Siena.

In the square, you can admire the Fonte Gaia, the largest fountain of the city originally decorated with sculptures by Jacopo della Quercia. The fountain as we can see today is a copy made in marble of Carrara marble, which is much stronger than the marble of the Montagnola used by della Quercia (the ancient Fonte Gaia ha been restored and is visible within the museum complex of Santa Maria della Scala).

Among the buildings overlooking Piazza del Campo, you will see and should visit the Palazzo Comunale (or Palazzo Pubblico, which is the city's Town Hall) and the Torre del Mangia.

The imposing Palazzo Comunale, made in brick and marble, houses the Civic Museum with several masterpieces of Sienese artists, including the beautiful Majesty by Simone Martini and the cycle of frescoes called "Good and Bad Government" by Ambrogio Lorenzetti. Both are quite spectacular and should be seen in person.

2. CLIMB TO THE TOP OF THE TORRE DEL MANGIA 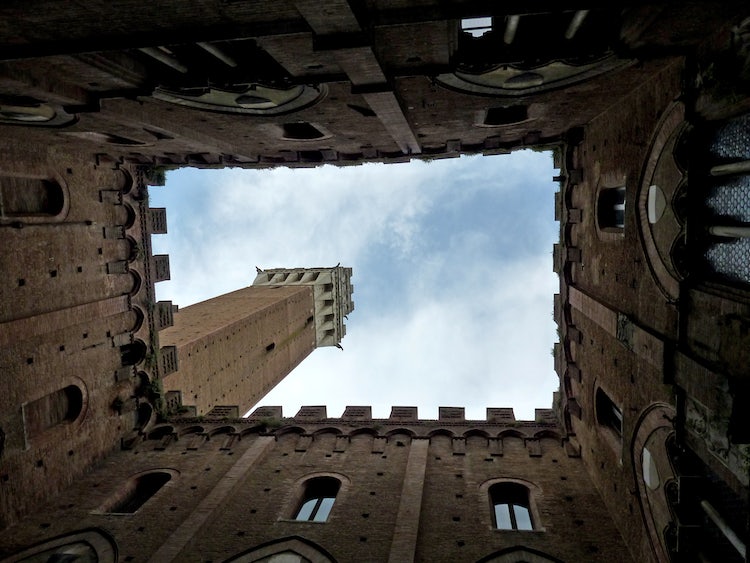 The Torre del Mangia, with its height of 87 meters, offers one of the most beautiful views of the city. The climb can be a bit tiring: there are over 400 steps, a bit steep and narrow, to climb but the 360° view that awaits you on the top of the tower is really spectacular and worth the "effort" you go through to reach the top.

For those who want to visit both the Civic Museum and the Torre del Mangia, I recommend to buy the combined ticket (available only at the ticket office of the Tower), which costs € 13. If you have the time, the frescoes of "Good and Bad" Government within the Civic Museum are extraordinary! 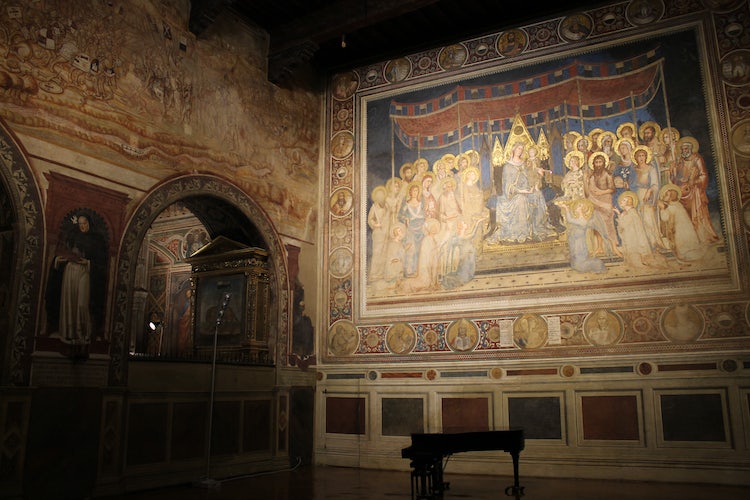 From here, our tour of Siena continues on to the precious Piazza del Duomo. While it is one stop, it is full of treasures that will take you the rest of the day to explore. Here you will enjoy some of the most magnificent treasures of Siena which I recommend you visit inside: the Cathedral, the Crypt and the Piccolomini Library. 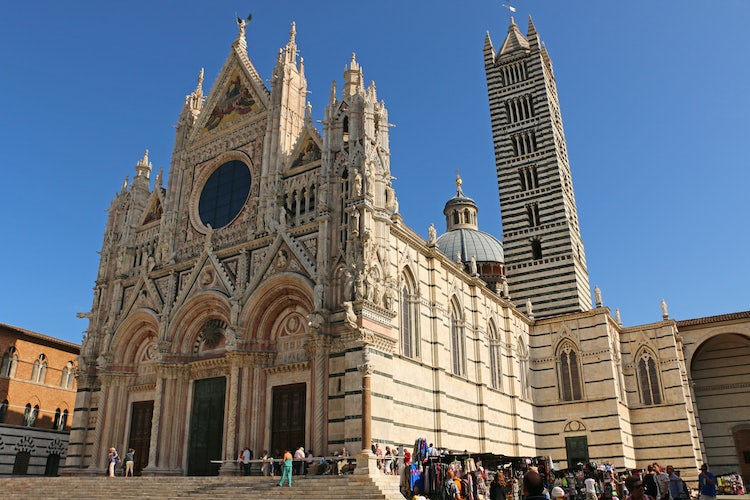 If you plan to visit these monuments, I suggest you to buy the OPASi Pass, a cumulative ticket that allows you to visit the Cathedral, Crypt, Piccolomini Library, Baptistery and the Museum of the Opera del Duomo (where you can enjoy the view of the city from the “Facciatone”), saving more of than 50% on individual tickets.

The OPASi Pass can be purchased through our partner Florence-Tickets.com.

Recently, a new itinerary inside the Cathedral has been opened, called "The Door of Heaven" that allows you to take a guided tour of the Cathedral from the top, enjoying truly extraordinary views. The route is included in the cumulative ticket called OPASi Pass +. If you want to do this tour, we suggest booking ahead during the summer months.

→ THE DUOMO OF SANTA MARIA ASSUNTA

The Duomo in Siena, or the Cathedral of Santa Maria Assunta, is one of the most outstanding examples of Romanesque-Gothic church in Italy. Imposing, almost dazzling for the extensive use of the white marble, the Duomo fascinates even from the outside. Entering, you will not be disappointed: the Cathedral is enriched with works signed by famous artists the likes of Donatello, Nicola Pisano, Michelangelo and Pinturicchio.

The interior, like the exterior, is decorated with white and dark green (almost black) marble, a choice made to reflect the colors of the city of Siena. 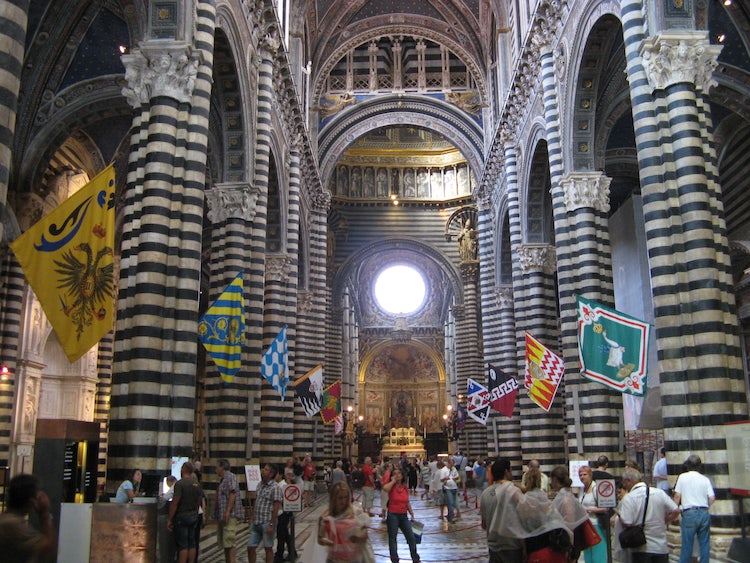 One of the most impressive works inside the Cathedral is without a doubt its pavement, consisting of 56 squares which represent scenes engraved and carved in marble. The most precious intarsios on the pavement are covered part of the year in order to protect them from wear. If you find yourself in Siena in the days of the Palio or between late August and October, however, you may have the chance to see the floor entirely revealed.

For a detailed description of the Cathedral, read this article on the Duomo. 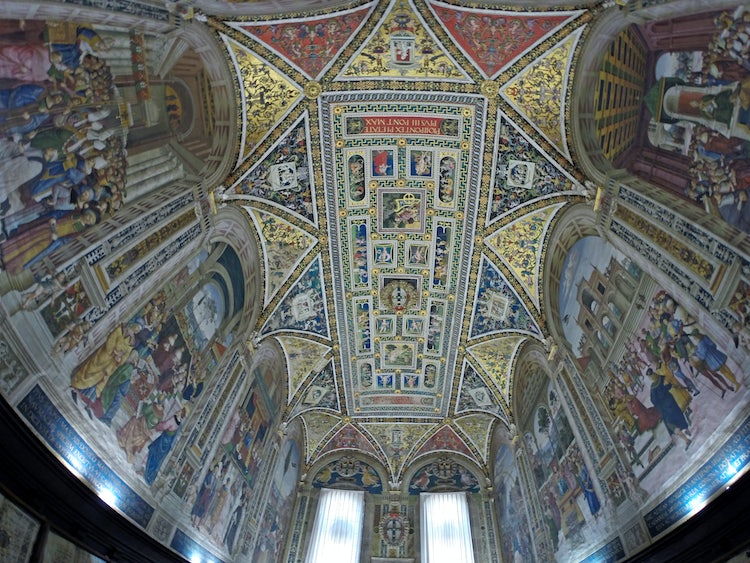 The Piccolomini Library, dedicated to Pope Pius II, is striking for the richness of its frescoes painted by Pinturicchio and his pupils, including Raphael Sanzio in the early 1500s.

Inside the Library, you can admire truly extraordinary frescoes on the walls, where you can see some scenes of the life of Pope Pius II, but also on the ceiling, shining for the abundant use of gold.

The Piccolomini Library is a true gem that you really can’t miss once you're in Siena. Find more about the history of the Library in this article.

The library is INSIDE the DUOMO. Make sure you find it, as many won't find the small door on the left side of the church and MISS this treasure!

The Crypt is located under the Cathedral. Here are many extraordinary frescoes of the Sienese school of the thirteenth century representing scenes of the Old and New Testament. 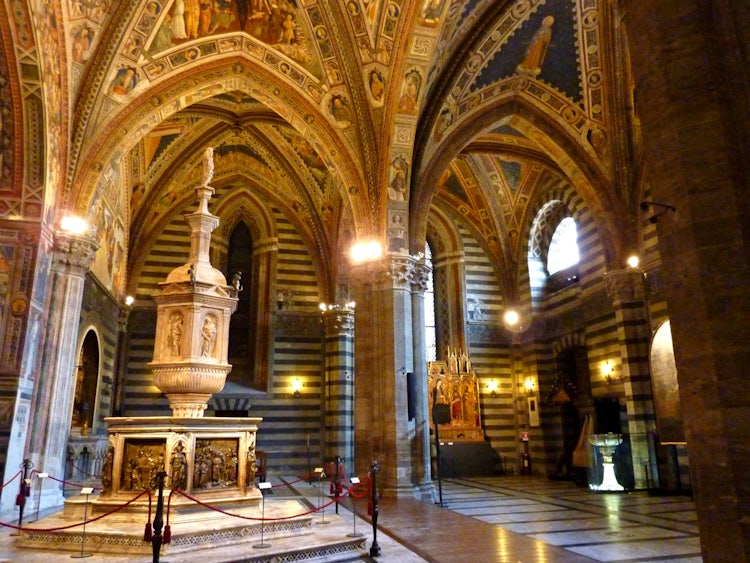 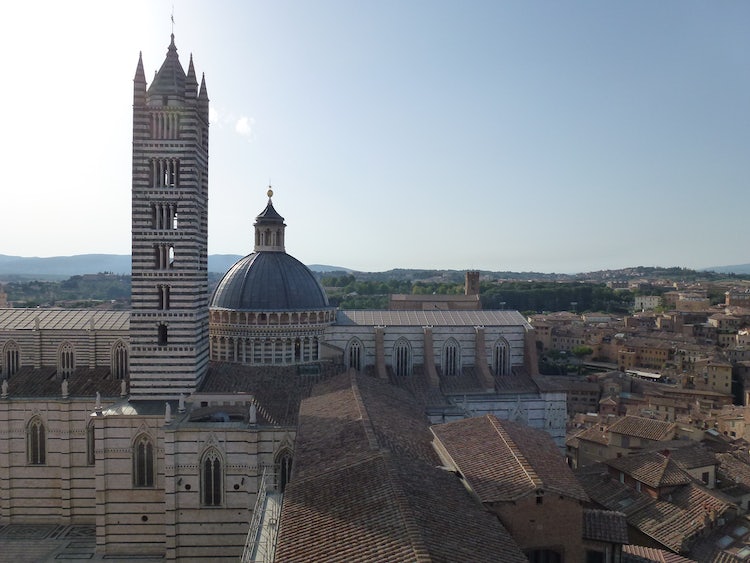 The Museo dell'Opera del Duomo is one of the oldest private museums in Italy and is located in the south side of the Cathedral, in an area that should have been an extension of the church on the basis of the project of the "New Cathedral", which was never completed.

Here, you can admire the original statues from the facade of the Cathedral, including those made by Giovanni Pisano, the window of the apse by Duccio da Buoninsegna and one of the greatest masterpieces of the early Fourteenth century by Buoninsegna: the altarpiece of the Majesty.

From the very top, you will get a great view of the cathedral and the rest of Siena! 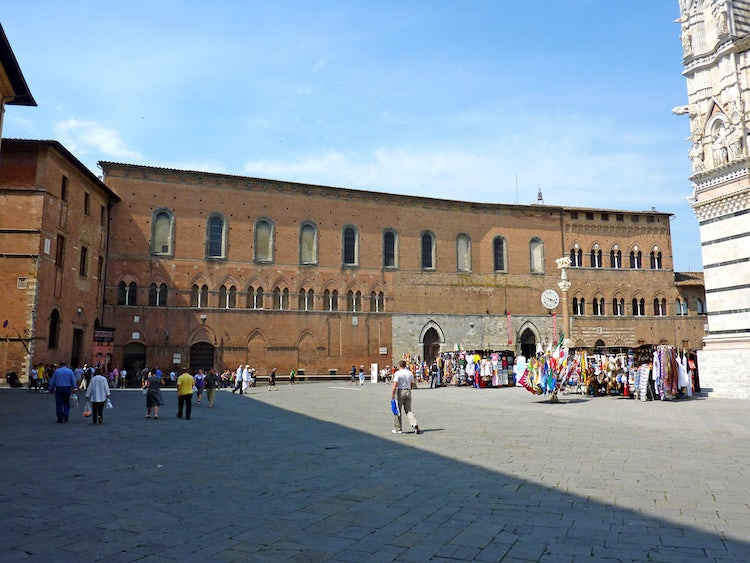 The complex of Santa Maria della Scala is one of the oldest hospitals in Europe, where pilgrims were welcomed (Siena is along the ancient Via Francigena pilgrimage route which connected Rome to central Europe) as well as the poor and abandoned children.

The complex is located right in front of the Duomo, so is very easy to reach and visit.

Santa Maria della Scala still has some parts under restoration, but still remains open to the public, and houses a vast artistic heritage as well as temporary exhibitions.

Arranged on four levels (the second is not yet accessible), it is a sort of "city within a city", so I suggest you consider if you have enough time to visit the entire complex or not before going in (as I have already said, you really should consider coming back to Siena for more than a day).

The attractions listed above are just a few ideas that can help you to organize your day in Siena, and again, as stated at the beginning of this article, you probably won't be able to see everything.

I strongly recommend you to save some time to just stroll through the streets of the city, browse the shops, wander through the colors and emblems of the various contrade districts that you'll find hanging from the windows and doors of houses and more to get a sense of what daily life is in Siena.

Shopping lovers will find several opportunities to shop for local handicrafts as well as food. For some advice for your purchases, read this article.

In Siena with kids?

If you're vacationing with children, you will find some additional tips for visiting Siena with them here.

Off the Beaten Path

Finally, if you prefer to know Siena off-the-beaten tourist path and more, we offer two walking tours that allow you to see the city from an unusual, more "authentic" perspective in this article.

View some photos of this enchanting city! »

Frescoes of Good and Bad Government in the Civic Museum of Siena...

The ancient fountains of Siena

Beautiful architectural structures of the...

On the tracks of St Catherine

Follow the steps of St Catherine of Siena and...